A collection of old and beautiful doors to some of the best houses in the Old City of Tripoli, Libya ( Collapse )
Towards the end of 19th century, in 1891, a French company obtained a concession from the Ottoman Empire to build the Beirut-Damascus railway. Beirut-Rayak, the first railway line in the Middle East began operating on August 3 1895, and was managed by the DHP Damascus-Hama and Extensions Company (Damas-Hama et Prolongements).

The story was slightly different for Tripoli’s railway station. Local entrepreneurs initiated the project through a joint venture. They established an anonymous company to fund the railway construction works on the Tripoli-Homs branch, which began operating in 1911. In the 1930’s, the Taurus Express, a night train left Istanbul once a week, stopping in Syria’s Aleppo and terminating in Tripoli. Its proximity to the harbour, a strategic choice for the railway station, contributed to the area’s economic growth. Goods arriving at Tripoli’s port were distributed via the railway.
....
After World War Two, the cement trade flourished and the railway traffic was extensive between Chekka and Beirut, ensuring the distribution of cement.
...
.... the last train in Lebanon ran between Chekka and Beirut in 1997.
...
Towards 1976, the Syrian military established a base at Tripoli’s train station. Its railways were stolen and sold in the informal market, bullets were fired into its steam locomotives, and its buildings ravaged.
З. Давыдовъ "Руководство къ изготовленію своими средствами при помощи ближайшей кузницы панцырей" 1915 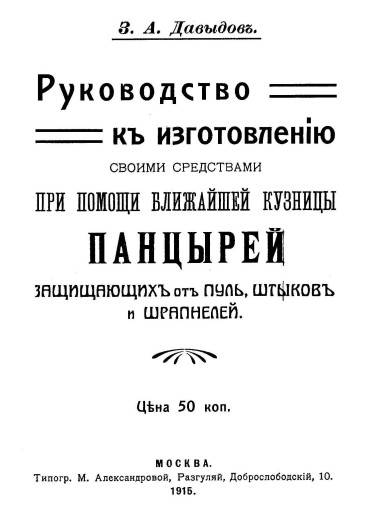